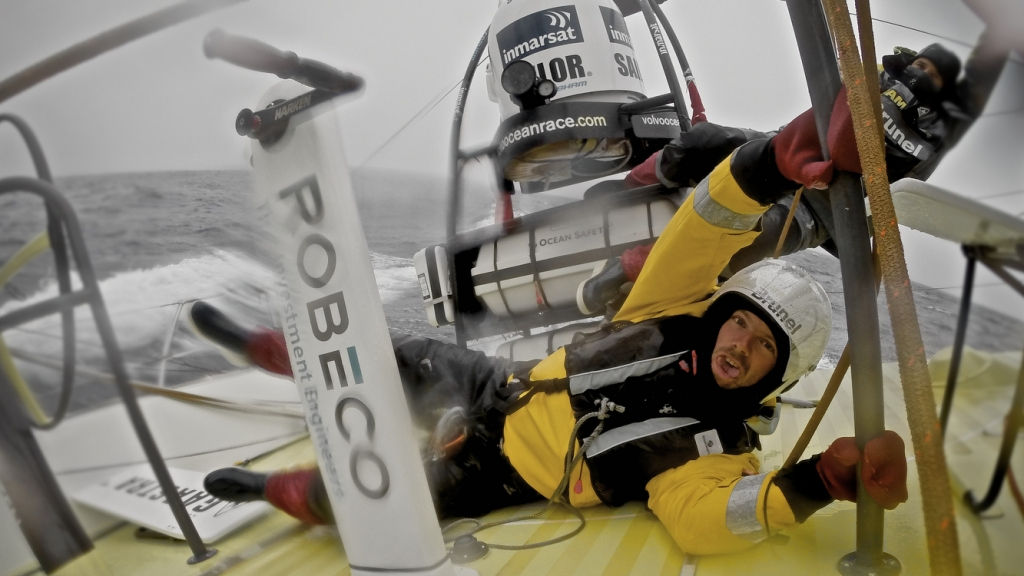 It’s a seriously difficult one and I apologize for the typos now. I think today I’ll keep this blog short and the reason being it’s very, very difficult to write at 32 knots. So here’s the run down in order of what fans we have out there:

Firstly you hardcore sailing buffs; this is the Volvo Ocean Race and I see now why they take a good break between races. It’s conditions like today that both break you and make you. I have watched this race so many years now, probably since I was eight. I envied those guys, watching as the walls of water blasted across the decks, I thought, WOW! This is so damn cool, I wish I could have a go.

Well here I am writing from the thick of it. The new Volvo Ocean 65s are more comparable to submarines, in fact today we probably were sailing faster under the waves than over. It’s so damn wet… I can describe and the video or photos don’t do it justice. I guess it will remain an experience best left to a first hand event. Seriously, we are absolutely sending the hell out of it; we had an A3 up, J2 and one reefed main. The speeds earlier where a consistent 25 knots in 22 knots of wind, (a building swell) we then peeled to a MHO, J2 and a reefed main (a much longer swell and bigger sea state now). We regularly see the clocks hit 30+ boat speed.

Today I signed out the hatch to Nicolai what speed, he handed a three two back, ya just being very casual that we were doing 32 knots. All I can say to any Under 30 out there, do whatever you need to do to get on this race, it’s a once in a life time experience.

Much like the anticipation for the arrival of the first big snowfall, for weeks we have been “patiently” waiting to arrive to the Southern Ocean—to sail in the fast, heavy conditions with the Albatross. Now it’s a reality and it’s like a dream come true for all of us. Coupled with the excitement of gaining hour by hour on the leading boats, we’ve been like little kids playing in the snow. Today, we’ve been on cloud nine.

The waves out here are, as promised, relentless. Over and over again, cold waves crash over the bow, jumping over the cabin top, crashing into the cockpit, and bouncing off winches and sailors before heading back off the boat. Sometimes, when the foam splashes up it reaches five feet in the air. There’s water everywhere.

We’re sailing with one of our biggest sails, the A3. We’re sailing in good pressure, keeping the boat averaging speeds of 19 knots. We’re surfing over and down waves. It’s simply amazing to be outside, sailing amongst the Albatross and other sea birds.

Every bright blue wave that Azzam punches through carries a huge wall of foaming white water rushing across the deck. It can’t be fought. One can only gasp for breath as the cold water takes your breath away and for a moment you’re underwater. Still, ripping across the water at 25 knots while leading the Volvo Ocean Race towards Cape Town, every wave is a reminder to the guys why they’re here in the Southern Ocean.

For Abu Dhabi Ocean Racing, there’s an efficiency onboard pushing everything forward. In the tough conditions, no energy is being wasted. Everyone is sleeping – or trying to – it’s a ghost town down below. Every moment you’re not eating or rehydrating you’re in a bunk.

The sustained 22-24 knots of the last 24 hours have been a lot of fun, there’s no question, but we couldn’t get south with it like the four leaders have, and they’ve stepped to the quick side of a nasty ridge of high pressure we’re desperately trying to outrun.

Unfortunately it will overtake us--it’s inevitable--and when it does two things are fairly certain: we’ll watch the group to the south extend, and we’ll watch Mapfre and SCA compress from far behind. There’s a good chance we’ll be the “monkeys in the middle,” wallowing for a day or two in no wind while we lose big on both sides.

Or, not. Weather models for this stretch of ocean are largely inaccurate with so few actual observations. And our far more direct course saves heaps of miles on the route to the south; if we can find some wind to the north, if the high shifts south, there’s always the outside chance we can sneak into South Africa ahead of the fleet. That’s the way we have to be thinking, at least. But for now, a few more hours of nice downwind sailing before the wind tapers, and quickly. Giddyup!

From the moment the wind started to increase, during the night, we’re drenched. Waves over the deck, constant spray, damped hands because of the water, wet clothes, tired faces, and the cold.

That’s what we’ve experienced on MAPFRE on November 2.

Things came to life, and appeared in the most unusual places. A good example is my media kit, with the cameras, lenses and accessories – it appeared at 4 in the morning, on windward, at the bow.