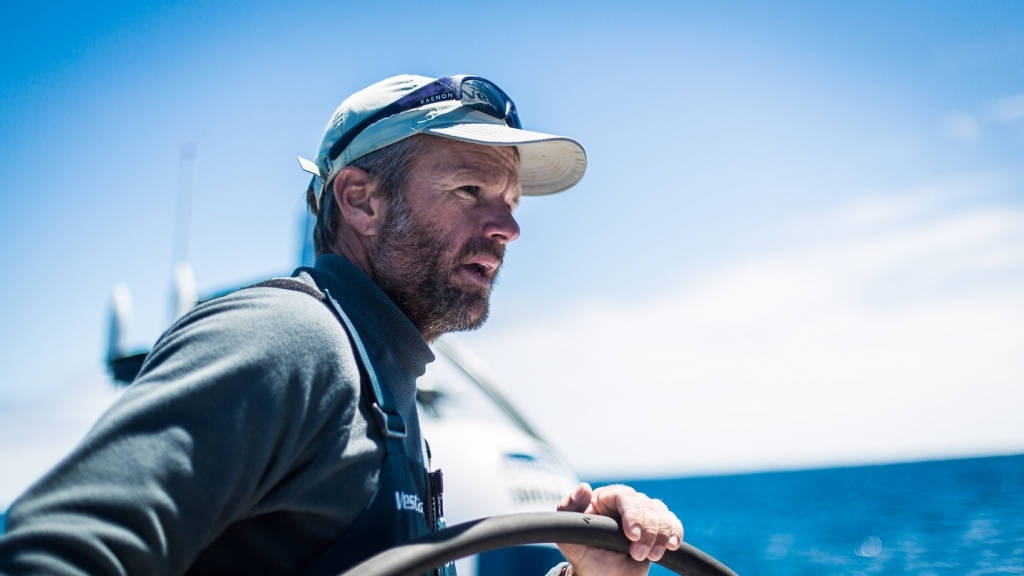 Hey Mark, how are ya?

Yeah good, and how are you?

(laughs) Mate, I’m ah, I’m sitting here on a, on a, I guess a ship-wrecked island, it’s beautiful, and I’m here in the dark because the generator got turned off an hour ago.

I’ve been making lots of calls on the satphone through the most beautiful night I think I’ve ever seen - and last night was one of the worst nights I’ve ever seen.

I can imagine. How are the crew holding up?

Unbelievably good. You know, we just had a really nice simple meal here on the island, fantastic. I just said to the guys just how many times in your life and your sporting career could you have such a major incident like we did, but yet not have, you know, media and friends and family and everything there. We’re essentially shipwrecked.

We had dinner and everyone’s spoken pretty openly and honestly about what happened, and how we dealt with the situation. About as solid a debrief as you could probably ever have.

So there’s a sense of real relief and feeling lucky amongst the crew. So Chris can you tell me in your opinion, what is the condition of the boat?

It’s extensively damaged. It took a massive, massive pounding. I was amazed with what was getting thrown at it and somehow it managed to keep us all in one piece. I was absolutely amazed at what happened.

It certainly kept you safe last night. So looking at the big picture, what are your major concerns right now?

My major concerns are obviously for the well-being of my crew, and also everyone who may actually have felt for them last night as well. Some of my first phone calls after colliding with the reef, once I let Race Control know, were asking (Team Vestas Wind Shore Manager) Neil Cox to get the families informed so that they knew what was going on.

During the course of things we lost all electrical supply, we lost satphone coverage, and the old snowball thing was happening. I can only imagine what was happening with the families.

So that’s my immediate concern and also that we need to recover this vessel as much as we possibly can.

What have you managed to salvage already, and do you have plans to revisit the boat and salvage more water, food, equipment etc?

Yep, absolutely. The whole crew, we spent as long a time as we could retrieving today. Retrieving diesel, oil, hydraulics from the boat - and we’ve got another full day planned tomorrow. The damage is massive in the boat.

It’s just amazing that I literally can’t, I don’t have the means to be able to send the photos that we have, it’s not possible from where I am and that’s what I said to the guys, I said we are literally shipwrecked and it’s an unique experience going through it.

To describe that island you’re on, just look around and paint a picture for us.

I’m looking out over the lagoon here, you can see the breaking waves on the reef which I saw all too close last night and I couldn’t begin to think of a bigger contrast to last night. It’s an absolutely stunning lagoon and bird colony that’s on these islands, and it’s just unheard of - so we are going to do our best and clean up.

Taking you back to last night again, can you just talk us through the evacuation what was it like making the decision to get off the boat, getting the life rafts off and then evacuating the boat?

When you talk about the tough decisions you have to make in life, I have to say that was number one for me, and it’s one of those ones where, okay, we hit the rocks and we had massive damage. The immediate concern was just for people to be able to hang onto the boat and buy time until the situation got better.

But by that, the situation’s not getting better, basically the boat has to destroy itself to end up more on the rocks and out of the breaking waves. I can’t begin to describe how hard it was literally just to hang on.

Also they don’t have time to go through how we wanted to evacuate if we needed to.. It was never, ever my intention to get off the boat in the dark. I just did not want to do it and that was the intention right from the start - but unfortunately when we hit the reef it was just dark so we had to spend 7-8 hours trying to hang on till daylight and we probably would have run, I dunno, 15 or 20 drills how we were going to do it.

We practised it throughout the night, always with the intention of never needing to do it, and had to make the call one and a half or two hours before daylight, when we got off.

What were you most concerned about - you talk about rocks and reef and deep water and shallow water and waves – but what was going through your mind, what was the ordeal when you made that call?

Well, we knew there was shallow water on the other side of the reef in the lagoon side. The problem was that for most of the night we were just on the deep water side where the keel was jammed in the rocks on the deep water side and the boat was being beaten by those complete point break waves. We had to just hang on through that with the boat breaking up around us, and still we kind of literally found and landed our way just onto the reef. So even then we still couldn’t get off, not safely.

And then towards daylight, like two hours just before daylight, the bulb broke off and the boat leaned over heavily. While that was happening we probably lost the back of the boat, it was gone, missing, and the deck started to fold and the boat was heeling over more so I made the decision that we were getting off.

We’d already practised deploying the jonbuoy off the back to see where it would drift to, its drift rate and we already deployed one life raft which was across the reef if we could get to it. We’d been practising throughout the night how we were going to do it. We made the call and got on with the job.

Sounds like you executed it perfectly. We are speaking to you on an Inmarsat iSat phone right now and I’m concerned we are using up valuable charge to organise all your logistics. Do you have the ability to charge it with a solar panel?

Yes we do - that’s been going on today. The only thing is I need to get a longer lead next time because to use it, I had to lie down on the sand. It’s been a lifesaver. We quickly sustained so much damage with flooding last night that we lost all electrical supply, we lost onboard phones, so we had to get the Inmarsat phone out of the grab bag.

You think you’re well trained on these things but it’s different in the heat of the moment. It sort of paves the way in regards to being able to keep informed the people who need to be informed and giving both me and the crew reassurances there were more people out there than just us dealing with the situation.

And on that subject you have thousands and thousands of fans out here wishing you well - and I’m sure that they would want me to give you that message. Do you have a message for your fans out there and your loved ones?

I’m obviously … upset with what happened… and um … I dunno. I said today to the guys …

(long pause) I said today we always believed that we’re a strong team and we made mistakes which led to last night, but I have been simply blown away by the way the guys dealt with the situation and also the attitude to try and make things as right as possible today.

Yes, I can see that you've made a massive effort to try to sort the impact on the environment. And I know that Volvo will work with you and your team to sort that out in the best way possible. And on that, your evacuation off the island, what's your plan at the moment?

We're going to be working obviously all tomorrow removing all ropes and as much wiring and everything as possible from the boat. And that will lead the way with whatever final decision needs to be made in regards to what we do with the boat.

So that we’ll all do tomorrow, and then I think on Tuesday morning, we make a 20-hour boat trip back to Mauritius where I’ll catch up with Neil Cox. ‘Coxy’ is already there, I spoke to him just before you Mark and he’s under way, talking with salvage crews, and got to make these decisions as to what can and cannot be done with the boat.

So obviously we've got all the videos and photos but can’t get them to the rest of the world at the moment. I'll take them back with me and they can assess it, but unfortunately I'm pretty sure of the outcome.

But you know, if there is anyone who can do it I believe it’s the people that we have in this programme. I can’t think the story has ended here, it's a pretty unique group of people when you consider what happened last night and I guess the crisis plan that both ourselves and Volvo had in place got as good an outcome as we possibly could have in this situation.

We hope that Brian has been doing his best, he's a fantastic Onboard Reporter and I'm sure he's been documenting his side of things. How much footage does he still have the capacity to film?

It's hard in a way, because there is such a story to be told of what’s happening here today and tomorrow and literally he lost a lot of camera equipment last night. We don't have the ability to go back through his footage from last night, but I think I looked over his shoulder at some of the stuff that he was doing and it will be mind-blowing.

And so, we're kind of on a budget with what we can do today and tomorrow. It was amazing to watch how people stood up for themselves.

Before you go, is there anything you need to ask of us?

No, I'm personally just very grateful for all the help and support that everyone has shown.